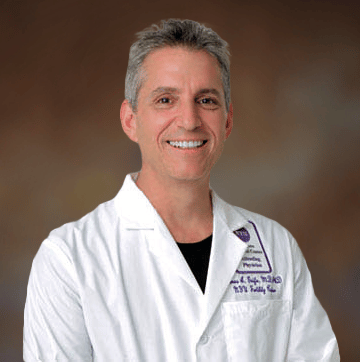 Dr. Grifo’s career in reproductive medicine began in 1988. He has focused his research on preimplantation genetic diagnosis, resulting in the first U.S. baby born following this procedure. Dr. Grifo received his doctorate in biochemistry, and his medical degree, from Case Western Reserve University. He completed residency at the New York Hospital-Cornell Medical Center and fellowship in reproductive endocrinology at Yale University. Board certified in obstetrics and gynecology, and reproductive endocrinology, Dr. Grifo has a longstanding interest in patient wellness and nutrition. He also is accredited in advanced operative laparoscopy and hysteroscopy through the American Association of Gynecologic Laparoscopists.

An elected member of Phi Beta Kappa and Alpha Omega Alpha (AOA), Dr. Grifo has received many honors during his career, including several fellowship awards. In 1996, he received the President’s Award from RESOLVE. In 1997, Dr. Grifo was named one of the “401 Best Doctors for Women in America” by Good Housekeeping magazine, and has been designated one of the best doctors in New York byNew York Magazine and Castle Connolly yearly since 1996. He has presented several prize papers at the American Society of Reproductive Medicine

Dr. Grifo has published more than 200 medical and scientific articles in addition to numerous book chapters, and he speaks frequently at medical-scientific meetings and symposia.  He has directed the research efforts at NYU, which has resulted in many improvements in assisted reproduction including nuclear transfer, blastocyst transfer, oocyte freezing and preimplantation genetic diagnosis. He is an active member, and has held office in the American Society for Reproductive Medicine (ASRM) and is a past president of The Society for Assisted Reproduction (SART).

Dr. Grifo is a practicing doctor and scientist with extensive experience treating couples with infertility.  His interests include egg freezing, reimplantation genetic testing and fellowship training.